30% OFF BLACK FRIDAY SALE ENDS IN

Bear Spray: Everything you need to know before using it

Yellowstone, Grand Teton, Glacier, and the Canadian Rockies are all places where black and grizzly bears roam. If you are planning on doing any hiking in or around these areas, carrying bear spray is strongly recommended.

Bear spray shoots an average of 30 feet for the duration of 5-9 seconds in fog form. The active ingredient, capsaicin, is derived from chili peppers and is designed to temporarily irritate the bears nose, eyes, throat, and skin giving a person the opportunity to escape unharmed. Bear spray can be purchased in sporting good stores, at national parks, and Amazon and ranges in price from $35-$50.

Want to know more? Read on for important tips about bear spray.

When do you need bear spray?

Bear attacks are extremely rare, but they do happen.

Yellowstone is known for its bears and since it opened in 1872, only 8 people have been killed by bears. The National Park Service does a great job at training the bears to stay away from people, and the people away from the bears (though there will always be those who don’t listen).

Still, anyone planning on hiking in areas where there are bears present should carry a can of bear spray with them.

We encountered three black bears while hiking on popular trails in Glacier National Park this year. They were literally right on the trail. So don’t ever think it couldn’t happen to you.

What exactly is bear spray?

Bear spray comes in an aerosol can with a safety on it to prevent accidental detination. It can include up to 2% capsaicin which is the nasty stuff found in really, really hot chili peppers that is also found in mace and pepper spray. If you’ve ever cut up peppers without gloves, you’ve experienced a tiny version of the irritation that occurs.

Cans of bear spray range in size, from 7.9 oz to 9.2 oz and can spray the distance of 20-50 feet from anywhere from 5 to 9 seconds in fog form. Many cans come with a holster for quick access. It is recommended that you carry it on your hip or chest instead of your backpack because you may not have time to search for it if you surprise a bear.

What does bear spray do?

In short, it deters a bear from attacking you. When used correctly, the fog like spray discharged from the can will irritate the bears eyes, nose, skin, and breathing to the point that it will stop pursuing you and hopefully run the other way.

Where can I buy bear spray?

National parks with free-roaming bears usually have bear spray for sale at the visitor center. Gas stations in or near the park will also carry it.

If you don’t want to worry about it while you are on vacation, you can purchase some from a sporting goods store like Cabela’s or online at Amazon. They typically range in price between $30-$50 per canister.

Be aware that bear spray is not allowed on airplanes; they consider it a weapon.

We’ve covered where to get bear spray if you’re visiting Yellowstone & Grand Teton, or Glacier.

If you buy bear spray but don’t use it, you can recycle it at many places in and around the national parks.

What kind of bear spray should I buy?

You can watch our testing on the video at the top of this post!

See the chart below and notes on my field test to help you make the best choice.

What we learned from our bear spray test

One last interesting fact, they all had a different color of fog. The Guard Alaska was orange, Counter Assault was yellow, and Frontiersman was white.

After researching and testing 3 different brand of bear spray, Frontiersman is the winner. On average, it cost $10 less than Counter Assault, sprayed just as far (Counter Assault’s big claim is they are the furthest spraying bear spray) and for a duration of more than one second longer. Plus, when we sprayed them all, the Frontiersman just felt more powerful.

Buy a test can

Most people won’t go through the effort of spending $100 on bear spray, spraying it in a remote place, and testing it out like us crazy people!

However, you can buy a slightly cheaper test can of bear spray on Amazon.

I highly recommend this because we now feel much more prepared to actually pop the safety tab and fire the spray if a bear was bearing down on us.

Don’t put it in your backpack

Carry the bear spray on your chest or on your belt. Make sure the can you buy has a belt holster to allow for easier carrying and access.

We literally rounded a corner and encountered a bear about 20 feet away in Glacier. Multiple times. You must have quick access to the canister!

We were on a boat ride in Glacier National Park this year when someone accidentally discharged her bear spray. Everyone in the first three rows were coughing and hacking and running for the bow of the boat.

BE CAREFUL not to accidentally discharge your bear spray!

This was the second time we’ve choked on bear spray; the first was in the video above, LOL.

Bear spray expires and only lasts 3-4 years because the can will eventually lose it’s charge. An expiration date is printed on it so you’ll know when it’s time to dispose of it. Keep in mind that bear spray is a hazardous chemical and can’t just be thrown in the garbage. Here are some ideas

If you want to know even more, check my video answering 20 questions about bear spray. Be safe out there! 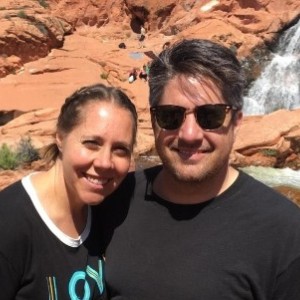 We're Matt & Cheryl, and we love traveling, especially in our awesome Rocky Mountains. We live in Utah and we want to share the wonders of the West with you. 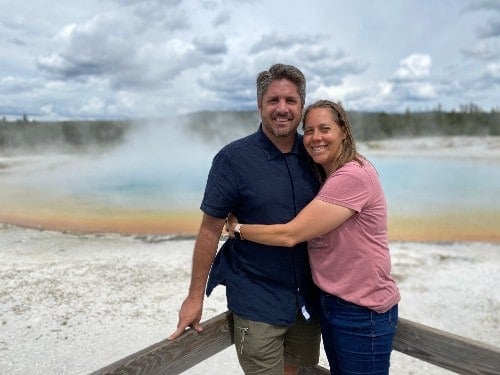